Young girl fined £2500 after running on pitch for Ronaldo’s shirt.

A young girl has been fined £2,500 for running onto the pitch at the Aviva Stadium in search of Cristiano Ronaldo’s shirt.

Following Ireland’s 0-0 draw with Portugal, Addison Whelan, 11, hopped the barrier at the Dublin stadium and made a beeline for the Manchester United star. She swerved around two security guards before calling out to Ronaldo, who told the men to back off and handed the young girl his shirt.

Addison expressed her pleasure with the conversation, however, she later revealed that she was fined £2,500 for the stunt.

She told FM104: “I was fined for running onto the pitch. My dad’s going to pay it.” Adding, her father would be “delighted” if someone else came forward to pay it.

“Then I sprinted onto the pitch, but there were security guards running behind me and there was another two coming from the other corner so I just kept sprinting.

“When I saw the other two coming from the other corner I ran more towards the halfway line so then I could swerve around them, but then they caught me.

“Then I was just screaming Ronaldo’s name. He turned around and he saw me and he was telling them to leave me.

“So then I was calling him over. He came over to me. I was just in shock and crying and I was like ‘Can I have your jersey? Please, please. I‘m a big, huge fan‘. He was saying ‘Are you okay?'”

The 11-year-old added: “When my dad saw him taking off the shirt, my dad’s face was just in shock. 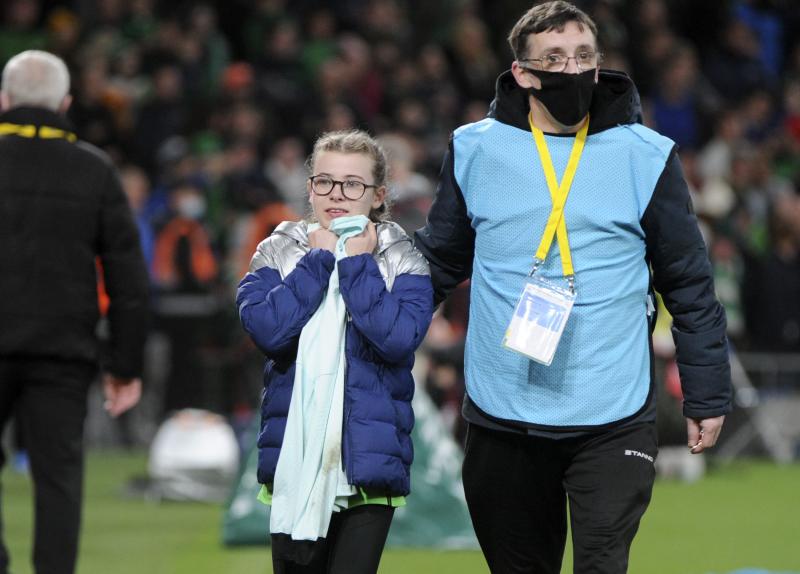 “I was like ‘Oh my God, this is it, this is my dream, it’s finally coming true’. That was probably his last time playing in Ireland.

“He [Ronaldo] said I appreciate that and everything.”

Young girl fined £2500 after running on pitch for Ronaldo’s shirt.