Frank Lampard withdraws from running to be new Norwich manager.

Former Chelsea manager Frank Lampard will not return to management at Norwich, according to various reports.
The former midfielder has been out of work since he was sacked by Chelsea in January, but according to talkSPORT, he was closing in on taking over at Carrow Road.
However, the Telegraph and Sky are now reporting that Lampard has withdrawn from the race to succeed Daniel Farke.
Whoever takes the role would have a tough job on their hands, with the club bottom of the Premier League and five points from safety.
The Canaries did get their first win of the season last weekend, a 2-1 victory at fellow promoted side Brentford, but Farke was fired just hours after.
The 43-year-old has also been linked with the vacant job at Rangers, after his ex-England team-mate Steven Gerrard left the Scottish champions to take charge of Aston Villa.
However, Giovanni van Bronckhorst is the favourite to take the role at Ibrox, returning to a club he used to play for.
talkSPORT had reported that Lampard’s appointment had been somewhat of a formality, but widespread reports now state that he will not return to management with the Canaries. 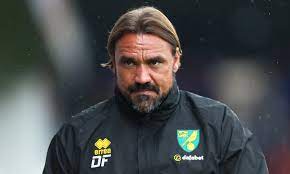 And now Norwich will have to turn their focus elsewhere in the search to replace Farke, who was dismissed last on November 6.

Farke had only just steered Norwich to their first Premier League win of the season, a 2-1 victory at Brentford, when he was unseated by the Canaries’ board.

Norwich sit bottom of the table with just five points from 11 games, with Southampton up next on November 20.

Lampard secured Champions League football through a fourth-place league finish and took Chelsea to the FA Cup final, in his one full season at the Stamford Bridge helm.

The 106-cap midfielder was sacked after Chelsea slipped to ninth in the table the following campaign however, after the club had spent more than £200millon on a squad overhaul.

Former Aston Villa manager Dean Smith is understood to be among the remaining candidates for the Norwich job.

Lampard Opens Up On Chelsea Departure