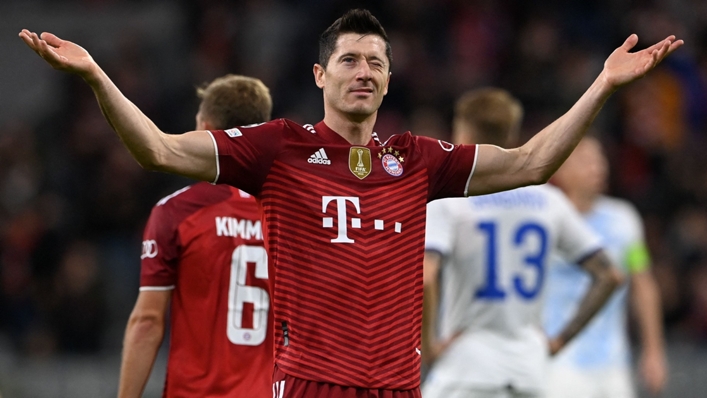 De Bruyne Says that Lewandowski is the best player in the world.

Of the players to have scored eight or more goals across all competitions in Europe’s top five leagues this season, Lewandowski ranks top for goals (15), minutes per goal (59.87), shots on target (27), expected goals (13.39) and expected goals on target (13.45).

The Poland captain’s fine form is a continuation of his remarkable achievements in recent years, including a treble with Bayern in 2019-20 and breaking Gerd Muller’s record for Bundesliga goals in a season last term.

With the Ballon d’Or set to be awarded next month after being cancelled last year, De Bruyne feels Lewandowski’s performances over the last two years are deserving of the award.

“I would have to look at a two year period and I would choose Robert Lewandowski,” De Bruyne said. “For what he has done goalscoring-wise and what he has won with Bayern Munich.”

De Bruyne also addressed the comments of his City team-mate Raheem Sterling, who voiced his openness to a move abroad due to concerns about his playing time.

“Sometimes it is tough to play one game and then miss then next, but obviously it is the manager who has to make those choices,” De Bruyne continued.

“We have a group of 22 or 23 internationals who are unbelievable so when the team plays good, there’s not a lot you can say as a player. It can be frustrating, but we are all supportive of each other.”

The Belgium midfielder also insisted that, while the team are keen to compete for a Champions League title, they are satisfied with their numerous domestic achievements in recent seasons.

“We always try to maintain a high level at his club and compete for titles,” De Bruyne added. “That is what we did last year. Winning two semis and a [Carabao Cup] final. Sometimes you can lose these games [the 1-0 defeat in the Champions League final against Chelsea] and you have to move on.

“We’ve not won [the Champions League] but we are trying. Hopefully in my period here we can get one. It doesn’t define your legacy, maybe for people outside. I’m happy with what we’ve done as a club for the last six years.”