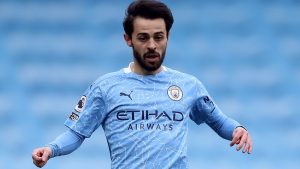 Any major signings are always exciting because everyone is willing to see how they adjust to new club, but it often has the unintended consequence of someone demanding to leave after losing playing time.

According to ESPN, Man City’s Portuguese star Bernardo Silva will be in that position if the club signs Jack Grealish, with Barcelona being one of the most likely destinations if that happens.

According to the BBC, City have made a £100 million offer for Grealish, indicating that they are willing to go all-in to sign the Aston Villa midfielder.

When it comes to Silva joining Barca, there are two major issues to consider: money and his potential playing position.

Barca are struggling for cash just now so they would need Silva to really kick-off to force a move, while a willingness to accept a fee in several installments would surely be needed too.

One more issue is that Silva will be most effective when he is on the right wing, where he can cut back inside, but that is Lionel Messi’s position, so someone would have to make a switch.

It’s not difficult to imagine a case in which Messi takes on a more central or even deeper role as time passes, but it’ll be interesting to see what happens with Grealish and, as a result, Silva.